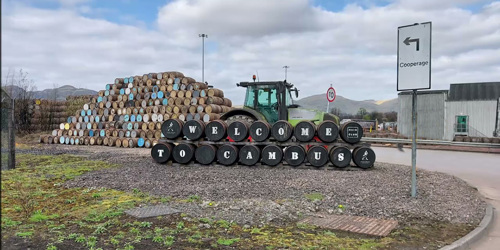 The 1820s were a transformative time for the fortunes of Scotch whisky. Firstly in 1823, the then Chancellor of the Exchequer Sir Robert Peel passed legislation, greatly reducing the taxation on whisky production. This encouraged the industry to go legal. Before that date, an excessive tax had been introduced to raise money to fight wars with France. The repercussions of this had only caused the opposite effect, with Scottish distillers migrating up to the Highlands and making their ‘water of life’ illegally, away from the prying eyes of the government.

They, of course, did not pay any tax. By reducing this punitive taxation, Sir Robert had kick-started the Single Malt Industry that we know today, with famous distilleries like The Glenlivet & The Macallan both taking out licenses in 1824 and with many others soon following suit. However, it wasn’t till the creation of blends that scotch whisky went truly international and became the success story we know today.

The Scots are great inventors, that is clear, and it was a Scotsman called Robert Stein who invented the Continuous Still. Now before we proceed, much credit should also go to Irishman Aeneas Coffey, who certainly improved Stein's design. Although the Irish saw no use for this new type of still, the Scots embraced it. Consequently, what became known as Grain Whisky was born.

Cambus Distillery was one of the first Grain Distilleries to open up in 1836, in the Lowland region of Scotland. In 1877 it became one of the founding distilleries in a company called DCL (which eventually became Diageo), but like many operations times were tough in the 20th century, with not only the two World Wars but also the Great Depression. Unfortunately for Cambus, they also had a fire that destroyed the facility in 1914. Production was very intermittent until the 1950s, but unfortunately in 1993, the doors closed for the very last time as part of a large cost-cutting exercise. Sadly, the site was demolished, but in 2011 a large cooperage was opened, so at least the whisky legacy continues.

For investors, it is very clear that whisky enthusiasts have really been warming to Grain Whisky for quite some time. Many independent bottlings have been released, as well as an increasing number of official bottlings by the likes of Diageo, with several from William Grant and Pernod Ricard. It's clear that the demand is there. With the Cambus 1988’s we recently had in stock, a rare opportunity arose to invest in 33-year whisky from a closed, lost distillery. Right there you have the rarity factor in your favour. As for your exit strategy, this was a short-term investment as the liquid is ready to drink and be bottled.

Pay close attention to the ABV as you want to give yourself a little breathing space, because it will lose most of its value if it drops below 40%. We should mention the whisky itself, as it's absolutely delicious! Like all good Grain Whiskies, it is smooth and soft, dominated by notes of vanilla, coconut and hints of custard. It will still age longer, that’s for sure and remember good quality old whisky, from closed lost distilleries, are always in demand.